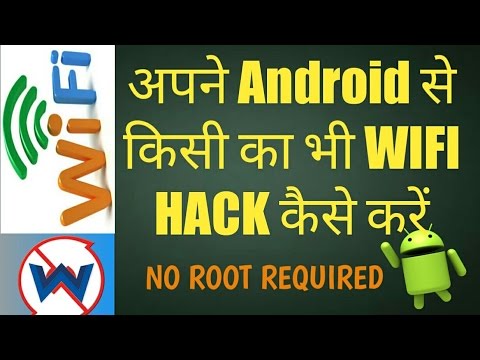 How to Hack WiFi (Wireless) Network

Apr 13,  · Cracking Wireless network WEP/WPA keys. It is possible to crack the WEP/WPA keys used to gain access to a wireless network. Doing so requires software and hardware resources, and patience. The success of such attacks can also depend on how active and inactive the users of . Jul 14,  · Now Let's See How we can Hack Wifi using this tool Features Of Airgeddon Tool. Interface Mode Switcher; DOS over Wireless Networks using different Method; Assisted Handshake file capture; Now Lets Start hacking wifi password using Aircrack and Crunch in Airgeddon Tool Firstly Download Airgeddon tool by cloning the reprository from Github.

Is there software that can help, or a trick? Read on to find how to make armor with craft foam. However, Hacking is The Crime. How does it work? It hacks the communication protocols through a global and refined analysis of the connections. It hacks and display on the screen the WiFi passwords of any network! It will Go To Router using Packets. And Packets contain the Password.

But, This is Paid Software. Once You Install the Software open it. Select the Option that Show in Picture. This Software might Run in Windows And That Contain The Password. A word list is just what it says it is. It is a list of words. Some of them contain commonly used passwords that have long been known to be the most commonly used passwords, and some of them are lists of passwords from leaks of hacked databases. You would use a wordlist to attempt to crack a password using a dictionary attack.

Torrent sites typically have large wordlists you can download, but if you do some google searching you will find a lot of websites with various wordlists. Wordlists are only so successful though. But, Hacking is The Crime. Divy Patel has been brought to help out with the creative stuff of latest technology. Table of Contents. What is Wordlist? If you enjoyed reading this Article, then we'd love it if you would share it!

Article Written by Divy Patel Divy Patel has been brought to help out with the creative stuff of latest technology.

Apr 17,  · This software will help in cracking WPS pin of the Wi-Fi network. Launch the Reaver application. Click on “Confirm” for confirmation that you aren’t using the tool for illegal purposes. Verify your settings and check the “Aromatic Advanced Setting” box. Click on “Start Attack” to hack a Wi-Fi network. Conclusion. Mar 06,  · How to Hack Wi-Fi Passwords Windows Commands to Get the Key. This trick works to recover a Wi-Fi network password (AKA network security key) only if Reset the Router. This isn't for getting on someone else's Wi-Fi. You need physical access to . Nov 11,  · How To Hack WiFi Password Step 1: Install Software Called CommView For WiFi. First of All You Need To Download The Zip File called “Hacking WiFi” Step 2: Capture The packets For Targeted WiFi. Once You Install the Software open it. It will Ask You to Total Time: 5 mins.

WEP works by encrypting the data been transmitted over the network to keep it safe from eavesdropping. The station encrypts the challenge with its key then responds. If the encrypted challenge matches the AP value, then access is granted.

CRC32 integrity check can be compromised by capturing at least two packets. The bits in the encrypted stream and the checksum can be modified by the attacker so that the packet is accepted by the authentication system. This leads to unauthorized access to the network.

The lower possible value of the secret key makes it easy to crack it. Weak Initial values combinations do not encrypt sufficiently. WEP is based on passwords; this makes it vulnerable to dictionary attacks. Keys management is poorly implemented. Changing keys especially on large networks is challenging. WEP does not provide a centralized key management system. It is used to encrypt data on It uses temporal keys to encrypt packets. WPA Weaknesses The collision avoidance implementation can be broken It is vulnerable to denial of service attacks Pre-shares keys use passphrases.

Weak passphrases are vulnerable to dictionary attacks. How to Crack Wireless Networks WEP cracking Cracking is the process of exploiting security weaknesses in wireless networks and gaining unauthorized access. There are basically two types of cracks namely; Passive cracking — this type of cracking has no effect on the network traffic until the WEP security has been cracked.

It is difficult to detect. Active cracking — this type of attack has an increased load effect on the network traffic. It is easy to detect compared to passive cracking. It is more effective compared to passive cracking. It is an implementation of the FMS attack. It has its own key generator and implements packet filters. Short passphrases are vulnerable to dictionary attacks and other attacks that can be used to crack passwords.

The following tools can be used to crack WPA keys. CowPatty — this tool is used to crack pre-shared keys PSK using brute force attack. Denial of Service Attack — the main intent of this attack is to deny legitimate users network resources.

FataJack can be used to perform this type of attack. Doing so requires software and hardware resources, and patience. The success of such attacks can also depend on how active and inactive the users of the target network are. We will provide you with basic information that can help you get started. Backtrack is a Linux-based security operating system. It is developed on top of Ubuntu. Backtrack comes with a number of security tools.

Backtrack can be used to gather information, assess vulnerabilities and perform exploits among other things. Some of the popular tools that backtrack has includes; Metasploit Wireshark Aircrack-ng NMap Ophcrack Cracking wireless network keys requires patience and resources mentioned above. At a minimum, you will need the following tools A wireless network adapter with the capability to inject packets Hardware Kali Operating System.

If the users of the target network are actively using and connecting to it, then your chances of cracking it will be significantly improved. Sufficient knowledge of Linux based operating systems and working knowledge of Aircrack and its various scripts. Patience , cracking the keys may take a bit of sometime depending on a number of factors some of which may be beyond your control. Factors beyond your control include users of the target network using it actively as you sniff data packets.

How to Secure wireless networks In minimizing wireless network attacks; an organization can adopt the following policies Changing default passwords that come with the hardware Enabling the authentication mechanism Access to the network can be restricted by allowing only registered MAC addresses.

Use of strong WEP and WPA-PSK keys , a combination of symbols, number and characters reduce the chance of the keys been cracking using dictionary and brute force attacks. Firewall Software can also help reduce unauthorized access. Hacking Activity: Crack Wireless Password In this practical scenario, we are going to use Cain and Abel to decode the stored wireless network passwords in Windows. Open Cain and Abel Ensure that the Decoders tab is selected then click on Wireless Passwords from the navigation menu on the left-hand side Click on the button with a plus sign Assuming you have connected to a secured wireless network before, you will get results similar to the ones shown below The decoder will show you the encryption type, SSID and the password that was used.

Summary Wireless network transmission waves can be seen by outsiders, this possesses many security risks. It has security flaws which make it easier to break compared to other security implementations. It has security compared to WEP Intrusion Detection Systems can help detect unauthorized access A good security policy can help protect a network.